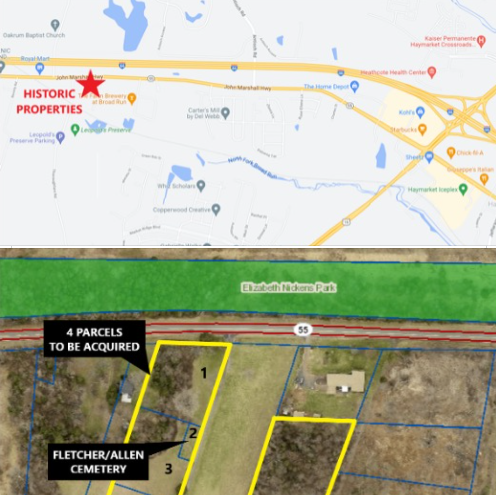 The Prince William Board of County Supervisors approved the purchase of four properties along John Marshall Highway, west of Haymarket, as part of the new Historic Communities program that aims to study, interpret, and preserve culturally significant enclaves throughout the County. The 2.24 acres, which were slated for single-family home development, fall within the current boundaries of the Thoroughfare Historical District, as recorded by the Virginia Department of Historic Resources. One of the properties contains the Fletcher Allen Cemetery, established in 1884. County leaders plan to convert the properties into a public interpretive park following a public master plan process with residents and stakeholders. Funding for construction of the park will be considered in future budget years. This action follows the Board’s approval on November 9, 2021 to purchase a 2-acre parcel in Thoroughfare. The press release for that action can be found here. The Thoroughfare community was established after the Civil War by freed slaves and mixed-raced families—including those of Native American descent—from Fauquier, Culpeper, Rappahannock, and Warren counties. The farming village prospered through the twentieth century and many of the original buildings, structures, cemeteries, and features like Oakrum Baptist Church, which was founded by freed slaves, still exist today.